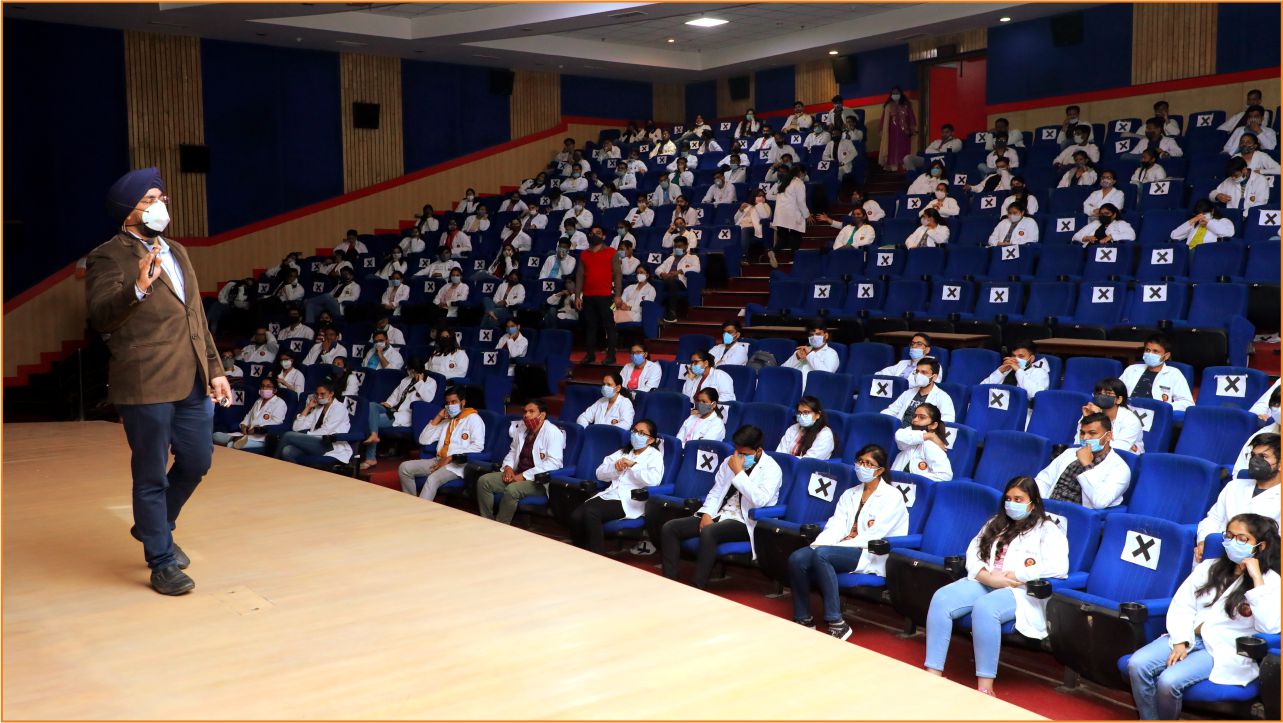 Department of Pharmacology of TMU Moradabad's medical college organized a quiz competition on Pharmacology - Pharmabiz 2021 under the aegis of the Indian Society of Rational Pharmacotherapeutics (ISRPT) for MBBS Students of Batch 2018.

The competition has been popular amongst the students, and it acts as an interactive way for the teaching-learning process. Teerthanker Mahaveer University, with its fresh approach, follows NEP 2020 guidelines to ensure a much-reformed teaching & learning journey. Competitions act as a healthy way of learning and hence are widely followed at the subsidiaries of TMU.

Pharmabiz competition included the preliminary screening round, held on 28th January 2021. The students received four sets of 50 MCQ's to qualify for the round that took place through the online mode. Eight candidates made it to the final round of the competition and were randomly divided into four groups.

The final round of the Quiz was on 20th February 2021, held in the university auditorium. The competition began with teaming the students randomly into four teams: Team Adrenaline of Tanishq Arora and Anuradha Singh; Team Bradykinin of Punya Thareja and Saumya Shrivastava; Team Calcitonin of Ayush Singh and Yashika Joshi; and Team Dopamine of Muskan and Pratiksha Saini.

The Quiz consisted of five rounds that acted as screening tests, as after the first two rounds, the team with the lowest score got eliminated.

The first round (Kuch to Bolo) consisted of MCQs with five options, out of which one was correct, each team got three questions with 10 points for each correct response, and it was a no-pass-and-no-negative-marking round.

The second round (Pehchan Kaun) consisted of three clues (statements), and the students had to guess the name of the drug. If the team answered in the first clue, they bagged 20 points, and with letting on more clues, the points were reduced consecutively along with negative marking for every wrong attempt.

After the first two rounds, Team Calcitonin had the lowest score and got eliminated.

The top three teams participated in the next two rounds. The third round (Kar Bhala to ho Bura) was based on the Adverse Drug reaction – each team got two questions. Each question had one picture of the adverse drug reaction followed by two questions. The team had to answer both the question to score 20 points, and no point was given for answering a single question.

It was followed by a Fourth Round (Bhule Bisre Paane), which was the history-related round. Each team got question had one picture of the scientist and two statements of the scientist's work, followed by two questions. The team had to answer both the question to score 20 points.

The team with the lowest score (Team Adrenaline) was eliminated.

The final round (Total Dhamaal) was a rapid-fire round between Team Bradykinin & Dopamine.  Each team had to answer 20 questions/maximum number of questions in 2 minutes; 10 points were given for each correct response. The questions were either one word or true/ false statements. At the end of round 5, team Bradykinin of Punya Thareja and Saumya Shrivastava were runners-up, and Team Dopamine of Muskan Pratiksha Saini won the event.

Dr. Prithpal Singh Matreja (Prof & HOD, Dept. of Pharmacology) thanked the students for their active participation and the entire Department of Pharmacology.